After a long count down, the Race Day of Mozart100 finally came. Together with Iva we drove to Salzburg early in the morning. The weather looked promising – half cloudy and temperatures around 12 degrees with forecasted max around 22. We found a good parking spot and quickly walked towards the race office, picked up the bibs and looked around. 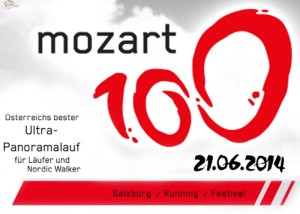 While our race was a ‘Light Trail‘ counting only 25.8 km, there were already runners on their way, fighting with 100 km or a 55 km distance… as we were walking through the city, we saw them passing by. Despite their distances, they looked so fresh!

Soon afterwards we found a shuttle bus to Fuschl am See where our race started. Fuschl is a popular summer holiday destination as it is located on the shores of a beautiful lake. It is about 25 km away from Salzburg but the racing buzz was there as strongly present as in Salzburg. As we were waiting for the start signal, we were checking our co-racers – a couple of Kenyans, some nordic walkers but mostly nice and friendly runners with ambitions similar to ours: to enjoy a beautiful summer day while running. 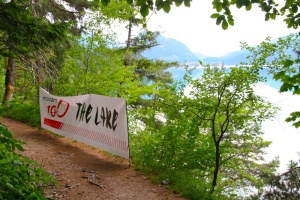 Almost immediately after the start, a narrow forest path took us along the lake. It lasted about 4 km and I hardly noticed I was moving – somehow I felt like running rather effortlessly, a feeling that would accompany me almost all day. Another 3 km on a small paved road and there was a sign ‘The Wall’ on the side of the road. For a moment I was wondering what did it mean, until I spotted a group of runners walking right above me. The Wall referred to the hill bringing us to Hof bei Salzburg, one that cannot be run by runners like myself :-). 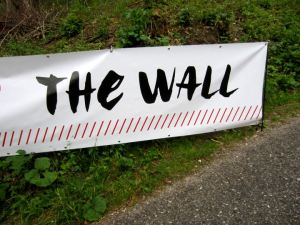 Just like the rest, I started walking as well and soon ended up on top. From here, it was just a short run to one of the food stations. As I was chewing my water melon, I spotted a famous silhouette: it was Dan Oralek himself, the icon of Czech ultra running. Of course I only saw him for 2 seconds and then he was gone for good but still – from now on I knew I was actually running on the same path as a celebrity :-).

From Hof the race course took us passing the beautiful chapel through meadows and woods to Ladau, Koppl and passed the Salzburg Ring. I was still running well – SLOW but steady, feeling good, enjoying myself, enjoying the scenery. From here (km 16) I knew I would make it despite the fear of the last climb… 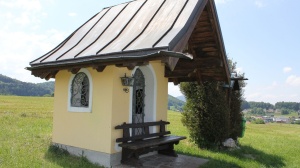 The chapel in Hof

After the blossoming meadows and soft forest paths of the countryside the ‘city trail’ started as we were approaching Salzburg. My half marathon time was 2:36. Around the 22 km mark we passed the railways and then I saw the Kapuzinerberg in front of me (640 m above sea level). Quick cup of water at the bottom and off I was. Vaguely I remembered that the climb was supposed to be spiced up by some stairs. Or were they on the way down? Well, 600 stairs further (and I was sooooo lucky to have trained the stair running throughout Juneathon) I still was not on the top….

Half way up I (barely) passed an elderly lady with poles – probably a local who gave me a friendly smile. She probably SAW the lactate accumulating in my legs by then. It hurt. At that point, I was already running for 3 hours (and Iva was at the finish line for a quarter of an hour…). And then after reaching the top, I realised that what goes up must come down and since my Garmin was showing that the finish line is only a mile away, the descend would inevitably be steep…. which it was. 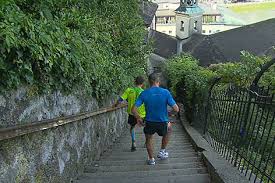