Archive for the tag “ultramarathon” 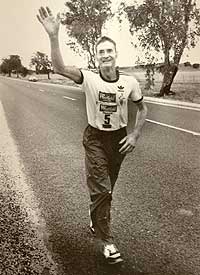 “I like to finish what I start doing. I like to see it through to the end, to the best of my ability.”

The Elfstedentocht, at almost 200 km, is the world’s largest speed skating competition and leisure skating tour, and is held in the province of Friesland in The Netherlands only when the ice along the entire course is 15 cm thick. Ever since the first race was organised in 1909, the ice conditions only allowed 15 races. The legendary one took place in 1963: the weather was so bad that out of 10.000 participants only 69 finished the race. So much for Wikipedia.

The Elfstedentocht is an amazing ice skating marathon, one that makes your heart beat faster, causes you fever, makes you wanna become a legend, too. If you once took part in the race, you somehow became a better person. So when last week it started freezing like hell, little by little the word started spreading that this year, after 15 years of winters not cold enough, the race might be organised again… Within 1 day, the Elfstedentocht was the number one news item in The Netherlands. The eyes of all nation were turned towards the 22 regional committee members in Friesland who regularly measured the ice thickness along the planned route and discussed if the ice could carry the weight of 16.000 expected participants. Hotels, restaurants and even camping sites started accumulating storage of food and blankets for the expected 2.000.000 visitors (!) who would travel to Friesland to view the race with their own eyes.

In the meantime, all people old and young digged out their ice skates from garages and attics and joined their neighbours on the local ponds and canals. One does not have to skate 200 km to feel a hero, after all. Various municipalities closed local water ways to allow water in the canals to freeze. The ice skating frenzy was on and went international: the CNN news published footage of people ice skating on the canals in Amsterdam.

And then something terrible happened tonight: the Elfstedentocht committee held a press conference to announce that the ice was not thick enough and Meteorological institute predicted the weather was going to change and it would not freeze hard enough for the ice to grow anymore…

Here a small motivation for all of us who still need to do our run tonight (and for our loved ones to see which DVD to buy us for our next anniversary):

Cut…. an hour later back from gym adding 7.2 km (treadmill) to my Janathon scorebook. The trailer DID motivate me, actually.