Archive for the tag “maiden voyage”

Many things have changed in my life since I joined (and completed) my first Athon in January this year. First of all, our beloved April passed away and I keep being grateful for the idea to name my blog after her. (My own original idea was Wounded Knee as my knee has been playing games with me for the past 2 years but heeey, no pain – no gain!)

Furthermore, I now consider myself a runner. I have been running (and racing) since January and enjoying it every time. Throughout the months I found out it is not for the weight loss or to tick off some imaginary box. No. I run because I like doing it. I like to feel the air in my hair, to smell the river next to me on a summer evening, to feel the fresh water drops on my body when having a shower after the run. In particular, I like the endorphins hitting me each time after about 4-5 km of running :-).

In January, I managed to exercise every day and came to a total mileage of 400+ km out of which 130 km was running. In June, I want to go out there running each of the 30 days. The total of 100 running miles would be great, the other activities are less important.

Juneathon blogging challenge: Make a picture at each run.

Today, on Day 1, I present you my running buddies. 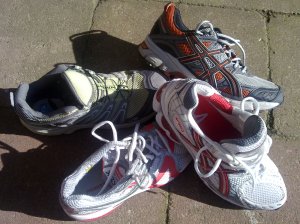 Until recently I only had one or two pairs of running shoes and it was fine. But 2 weeks ago, the girl in me couldn’t resist a major discount on the Salomon trail shoes and Asics Nimbus. Both these new pairs are probably the cheapest shoes I’ve ever bought so don’t blame me… As the matter of fact, I took the pair of Nimbus for their Juneathon maiden voyage today and they ran great!